Best mates, the baby kangaroo and the wonder dog that saved it

By all accounts the baby kangaroo should have not survived the road accident that claimed its mother...but then along came Rex the wonder dog.


The pointer discovered the baby roo, known as a joey, alive in the mother's pouch and took it back to his owner.

"I was so surprised and delighted," said Leonie Allan. "Rex saved the day."
The four-month-old joey's mother was killed by a car near Ms Allan's home in Torquay, Victoria, Australia. 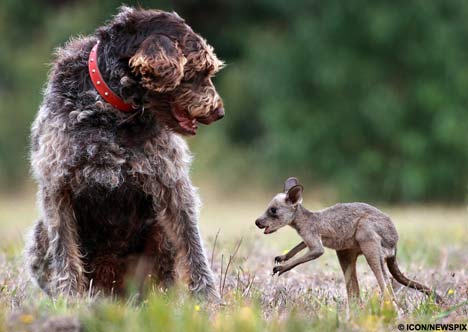 Play mates: Rex the pointer and the baby kangeroo he rescued and took home after its mother was killed on the road in Victoria, Australia

"I'd taken Rex for a walk and we'd gone past the dead kangaroo that morning, and later I was working out the front and he started pointing," Ms Allan said.

"I was worried he'd found a snake and called him back, but when he returned he dropped the joey at my feet.

"He obviously sensed the baby roo was still alive in the pouch and somehow had gently grabbed it by the neck, gently retrieved it and brought it to me."


Amazingly, the 10-year-old dog - a cross between a German shorthaired and wirehaired pointer - had been so tender with the joey that it was both calm and unmarked. 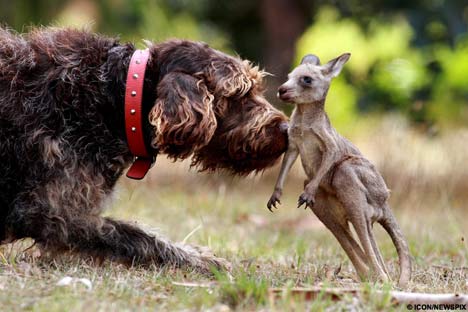 Friendly nuzzle: Rex was so tender with the baby kangeroo that it has no fear of him

"The joey was snuggling up to him, jumping up to him and Rex was sniffing and licking him - it was quite cute," Ms Allan said.

The joey, to be named Rex Jr after his saviour, is now being cared for at Jirrahlinga Wildlife Sanctuary and when he is 18 months old will be released back into the wild.
Director Tehree Gordon said she was amazed by the trusting bond between the two animals.

"We often have humans that come in after accidentally hurting joeys when they wriggle and fall from their hands," she said.


"That Rex was so careful and knew to bring the baby to his owners, and that the joey was so relaxed and didn't see Rex as a predator, is quite remarkable." 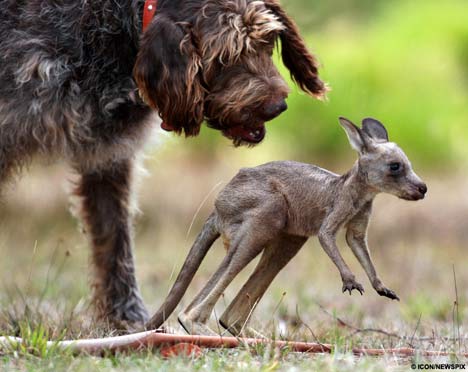 Jumping for joy: The two animals have bonded and play together

She added: "It's a lesson that dogs can be raised to be familiar and compatible with wildlife, you just have to teach them right from wrong.

"It's a credit to the owners, who have taught him to be tolerant of the kangaroos, echidnas and other animals that regularly come through their property."

Owner Leonie said Rex is not always the perfect hero: "He's no angel, just an ordinary family dog with a bit of a naughty streak and a very gentle, passive, lovable temperament."

That is an amazing and very cute story. This is why I love dogs!

That's such a cute story!

Such a lovely story!

That is such a cute story!!
S

Great story! Thanks for posting it!

In a Lemon Heights Midcentury Marvel

Thanks for posting this. I had a crappy day but this made me feel better.
M