Besides To Much Peroxide, This Boom-town BRAT, Was Caught Stealing A Dress !

A spokesman for Peaches Geldof says it was an 'honest mistake' 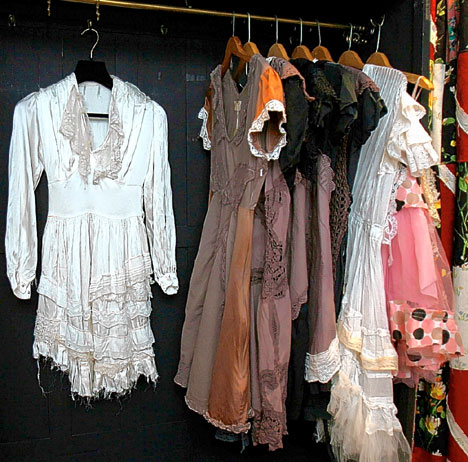 Peaches Geldof has been accused of leaving a trendy London boutique without paying for a £500 dress.


The 18-year-old was reported to security guards after allegedly walking out with a silk dress from the Victim fashion store near Carnaby Street.
Boutique designer Mei-hui Liu said she noticed that the expensive cream dress had vanished after Peaches was browsing the rails on Thursday evening.
She called security and complained to the teenager's agent at Insanity Talent Management. Two hours later Peaches returned to the store with the dress and an apology.
Police were not called, after Peaches said that it was a "misunderstanding."
Miss Liu said: "She said sorry and that it was a misunderstanding, but the dress is ruined.
"She said the dress had got caught up in her scarf and because it was the same colour she didn't realise she had it in her arms. The agent's assistant arrived on Friday afternoon with the money for the dress. The dress is worth £500 but we charged £250."
Peaches was thought to be filming a new series of her reality TV show when she rang the doorbell for entry into the Marshall Street boutique around 5.30pm.
Miss Liu said: "She came in and said 'Hi, I'm Peaches.' I didn't know who she was and I didn't care.

She asked for my business card and said she would give me a call if she ever needed a dress.
"She was looking through the rails with her back to us and then I saw her wrapping something in her scarf. She took the business card from me, walked away and jumped into her private car."
A spokesman for Insanity Talent Management said: "The claim is totally incorrect. Peaches has a receipt for the supposed stolen dress.

The payment was made today because the store's credit card machine was not working yesterday. She most definitely has not been shoplifting and nothing has been reported to the police."
In October 2006 Peaches, the daughter of Bob Geldof, was stopped at London clothes shop Urban Outfitters on suspicion of shoplifting a coat. She was allowed to leave after paying for the item.

"It was an honest mistake at the time and Peaches went back to the store having been told the dress was missing.

is she a celeb? i have no idea who she is!

Right. Was this girl ever given any limits? She's awfully young to be pulling this stuff. She can obviously afford any dress she wants. she needs a reality check.

LouisLady said:
is she a celeb? i have no idea who she is!
Click to expand...


she's Bob Geldof's daughter. He organized the Live Aid musical fundraising event years ago. Was he honored by the Queen, Prada?

not even that crazy about the dress haha.

Woah! Yknow whats insane?? Just yesterday i remember thinking about Peaches (dont know, she just popped into my head) and I thought "Havnt heard much on her for a while. I wonder what shes up to these days."
I kid you not... crazy...
Anyways, what a hideous dress... I wouldnt even blow my nose on it.

boxermom said:
Right. Was this girl ever given any limits? She's awfully young to be pulling this stuff. She can obviously afford any dress she wants. she needs a reality check.
Click to expand...

Miss Liu said: "She came in and said 'Hi, I'm Peaches.' I didn't know who she was and I didn't care.

Looking at her pic reminds me of that line from the Devil Wears Prada:

"I asked for young, clean, and smiling and you gave me dirty, tired, and paunchy."
I

Im sick of this wannabe scenester and her pack of friends. Her, & her sister, Alexa Chung, Kelly osbourne. Yuck. The same tacky poses with the peace signs. Runining decent night spots in london. Funny how she used to be up on her high horse when she used to write for elle girl about this kind of lifestyle. She is blah and her style is blah end off.

She should've jacked herself some better makeup.

2 incidents of her supposedly shoplifting...hmm can't be a coincidence surely?

I don't care much for her or her style in any case.
N

She needs to get a proper job and stop trading on her surname!

boxermom said:
she's Bob Geldof's daughter. He organized the Live Aid musical fundraising event years ago. Was he honored by the Queen, Prada?
Click to expand...