Canadian pop star Avril Lavigne is definatley a celebrity that just doesnt sit quite right with me. Do any feel the same? Do any of you disagree?

From the moment she first appeared on MTV brandishing her debut single 'Complicated' back in 2002, it was clear that this was a girl different to all the other sugary-sweet popstars at the time. A girl that was tough, edgy, angry and rebellious.

"Oh what a breath of fresh air!" we all thought.

That was, until it became a little too forced. Suddenly every girl in town was sporting poker-straight locks, their mothers eyeliner, their brothers old converses and their dads ties. Oh dear.. suddenly, being rebellious and individual was the 'in' thing.
Oh the irony!

Everyone began to get a tad bit confused.... but that wasnt until she became the model for Chanel! Certainly Ashlee Simpson was on the right note when she was the face for Skechers shoes during her chick-rock stage? But Avril and Chanel?! That was as crazy as combining..... um........ Avril with Chanel!

And now, in 2007/2008, we are once again greeted with a shiny new, bubblegum-punk version of Avril. Another image change, another dollar! With a shot of Barbie-pink sliced through her blonde locks, and her music videos (such as 'Girlfriend' and 'Hot') containing
choreographed dance routines - with the aid of other female dancers (complete with nose rings, torn fishnets and stud belts), are we to forget her momentary brush with class?

Apparently 'The Best Damn Thing' to do with your fans to confuse the heck out of them!

Lets not forget that Avril is infact married to Sum41 member Derek Whibley (tying the knot back in 2006). So is it possible she can still reach out to her younger fans and maintain the act as a missunderstood, independant, rebellious teen always singing about boys (and how to get them to dump their nerdy girlfriends and be with her instead), all the while, being a dedicated wife?! 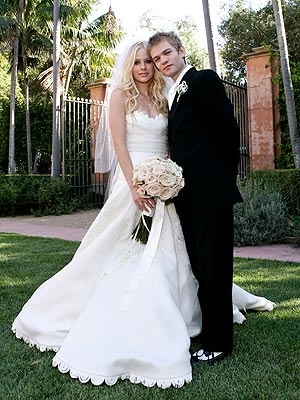 It just doesnt match up.

The majority of us arn't taking her very seriously at the moment because the contradictions seem endless. Avril actually seems like an ordinary girl that was manufactured to be something shes not. While most celebrities portray their 'character' in public to maintain what we, the public, are greeted with on the tv or the radio, for a millionaire teen, Avril sure does seem to be a moody brat off air!

i happen to be a haters...
i never liked her from the very beginning. it was obvious that she's not a real punk but try to say that she's punk, she's cool and she's rebel...

yeah a rebel who took more than an hour a day to put make up on her face... LOL

it's clear that she's a made up project to print money

and she's certainly karl's biggest mistake, i don't understand why karl supported her
•••

FYI I am a guy

seahorseinstripes said:
i happen to be a haters...
i never liked her from the very beginning. it was obvious that she's not a real punk but try to say that she's punk, she's cool and she's rebel...

yeah a rebel who took more than an hour a day to put make up on her face... LOL

it's clear that she's a made up project to print money

and she's certainly karl's biggest mistake, i don't understand why karl supported her
Click to expand...

ITA esp. about Karl. Hated her from the beginning
•••

She's faker than Paris, Britney, and all the other Hollywood girls. At least they know what their act is supposed to be. Avril changes hers every time a new CD comes out. She has no style of her own.

Her old mall punk act annoyed me too. When I first heard Complicated, I imagined her to look like a country singer. Definitely thumbs down for Avril Lavigne.
•••

I don't hate or dislike Avril Lavigne, because I do not really know her. Still, from the very beginning of her career, when she was proclaimed as being the anti-Britney, I knew that hers was a fake image, just as fake as Britney's, if not more. There have been numerous times when Avril Lavigne contradicted herself in terms of that said image, thus making it obvious that her attitude is just an act (I won't say fraud).
•••

I think all these girls are products of what their management wants them to be and what will "sell" at the time. Almost all the entertainers can be accused of "changing" themselves at one time or another....Britney, Aguilera, etc.
•••

Sorry if this seems a little mean, but for those of you that think she seems fake, I don't think you have gotten the entertainment business at all or have a rather "immature" / naive view on how we are as people in the world and especially how music and public image corresponds with our private selves. This has nothing to do with whether you like her music, style or her public pesona at all, but the part of her being "fake".

I'm not a fan of avril's music in general. She had some ok songs, but I never gotten into her albums.

When she first started out with the hit complicated, she was never really a punk artist in the historical sense of the word. Yes, the song had more elguitars than the slightly rnb-ish pop of christina aguilera and the pure swedish produced pop of britney spears(which had none) , but avril's music was from the beginning packaged as pop. Her image was maybe more "badass"and she made that mainstream, but just as trends change and we no longer wear puy hair the 80s way, this happens all the time. How something looses credibility (or becomes too forced) just because it spawns a mainstream trend is beyond me especially when the artist is packaged as a pop (ular) artist to begin with.

As for her not staying true to her initial image? Well, being a pop artist your role is to entertain first and foremost. That being said, these celebrities are just ike us in the way that they want to try new things and that they CHANGE as a person. Her working for Chanel, one of the famous fashion houses, with the above in mind, is it really that surprising, and in what way is she really betraying herself? She's obiously interested in fashion and style and that goes very well with working for one of the biggest companies providing "style" to the public.

I don't understand why singers in particular always have to be faced with accusations of not being "real" when people gladly accept actors in roles they have nothing in common with. It's not that different. If Angelina Jolie can portray a crazy person in Girl interrupted and do a really good and convincing job, why cannot a married avril be mad about her former boyfriend similarly? (I'm not saying she does, but that is beside the point and judging from her popularity she does). In the end both the mainstream actress and the pop songstress do a job, work keeping people entertained.

Another interesting note is that she's probably one of the most famous western artists really nailing the "japanese" style with the blend of cute and pop rock, reflected by her strong album sales. THe best damn thing was the fourth most sold album in 2007 selling 848,912 copies. The second most selling western artist was Linkin park at 27th with 362,773 copies sold.
•••

Her image is just as convoluted as the pop tarts that she is supposed to be the antithesis to. She's no different than the Britneys or Christinas of the world. They are all products. She just comes in a different packaging.
•••

^I disagree about Christina..she's in her own catergory. She actually does have talent.
•••

some of her newer songs! In the picture with the pink dress, she looks like she has so much eye makeup on its weighing her eyelids down! I remember reading in a magazine that since she became married, she "realized she was being immature and has grown up." Please. And I AGREE about her and Chanel. Not a good idea!
•••

I agree with sweatpea83 about Christina having AMAZING talent....but her "image" has changed through the years like most artists trying to keep up with the times.
•••

With all the changes she's made in her image...I just chalk it up to experimenting, growing up and whatever her stylist wants to do this time.

The reason "it just doesn't match up" is because she has no talent. She figures if she can keep baffling people with this BS, they won't notice. And sadly enough, it works.
•••
You must log in or register to reply here.
Register on TPF! This sidebar then disappears and there are less ads!
Sign Up
Top