Home & Garden At what point do you just give up on home remodeling?

I am sitting her taking a break from painting a room, and started to think. First off, I HATE painting. All the taping and multiple coats....

Anyways, I realize that in order to make this home we have work at all for the future I would need to put in a TON of time that I do not have or hire some contracters to do the work for me. Either way the house will remain entirely too small for any future family my wife and I have.

So I am wondering what is the point in doing any improvements. Sure, some things add value, but what we like might not be what a prospective buyer likes.

We have been on the urge of building for the longest time, but we are holding out till I know where I will be going to Med school (hopefully going to that is).

Well I think that my rant about homeownership is running it's course, and I need to get back to that most loathsome of job....painting.

well first of all.. you have to think of home projects like a never-ending part time job. do one room at a time, don't give up entirely, because not only will you get annoyed everytime you look at some unfinished or untouched room/etc, but you'll also get tired/stressed/frustrated to ever look at it ever again.

think of it like the Golden Gate Bridge in SF.. the city is constantly painting it all year long.. from one end to the other, back and forth. so a home remodel... just one room at a time.

now.. why are you painting multiple coats? are you using a good primer, and good paint to begin with? and what colors? a typical paint job should be a nice solid (quality, not solid color.. that's a given haha) primer, followed by at most two coats of the color. if its a dark, then 3 coats.. but if it's a good brand/quality, 2 would be more than enough. Remember that in some cases, one coat is perfectly fine, because once it dries.. it's darker than when it goes on wet.. and you have to counter in lighting (incandescent? natural? florescent? etc etc).

one thing about doing improvements other than adding value.. is if you are planning to sell the home, and the buyer has an inspection and they find a bunch of stuff that just so happen to be on your "to do" list of projects.. you'd end up doing it anyway. i rather have a good inspection where the only flaws they find are a leaky faucet or something small/insignificant. a lot of buyers are very hesitant to continue with the transaction if their inspector finds plenty of flaws that you could've fixed/hidden while living in the home.

take a look through HGTV.com and DIYnetwork.com for some not-so-time-consuming projects and easy improvements you and your wife could do.

The wall in this room is fairly rough, so the multiple coats are because of this (and I am using the right roller).

The thing is that we are getting to the point where remodeling will go into either bathroom or kitchen remodeling. Just not sure I want to make that commitment. I finish everything I start because I could not stand to look at a half finished part of the house. This is also why I am fearing the next step.

yeah.. bath and kitchen are the big ones that are really the ones that matter. when we sold our house, we did both baths and the kitchen and the rest of the house we left alone and it sold it within 1 month.

Ahhhh, Kitchen and Bath remodels!! Those are the absolute worst, but those are really the key spots that people will look at when they're buying a home, so investing in sprucing up the kitchen and bath would be worth it.

As for taping, have you tried getting an edger? We painted our whole house without having to tape one bit (except when we painted window frames). Edgers are great! Granted, you've got to be a bit careful not to get paint on it's wheels, but if you do just be sure to have a wet rag so you can wipe off where you made the mistake.

Get tinted primer. No using white primer!! With a tinted primer, you're likely to save yourself from having to do 3 coats of paint (primer, paint, paint). Tinted primer costs the same as regular, just take the primer to your mixing station, tell them the color room you want and they'll mix it appropriately.

I'm not a big fan of painting either, so I understand your pain

When we moved into my Grandmother's house (still in the US) we had to remodel the WHOLE THING!! And we did it all by ourselves. We ripped off wallpaper (where it came off, in other rooms we just painted over it so we wouldn't ruin the drywall), ripped out carpeting, gutted and expanded the kitchen, installed a new kitchen, built out the basement and doubled our square footage, turned the carport into a 2nd living room, painted all of the rooms, replaced the front door, replaced all windows in the house (we didn't do this ourselves, of course, lol), painted the 2 garden sheds outside, ripped out ALL of the grass in our yard (well over an acre) and reseeded it, planted flowers, did landscaping stuff, etc. It was a pain in the @$$, but in the end it was definitely worth it and my parents made a HUGE profit on the house when they sold it!

Just in case you don't know what an edger is: 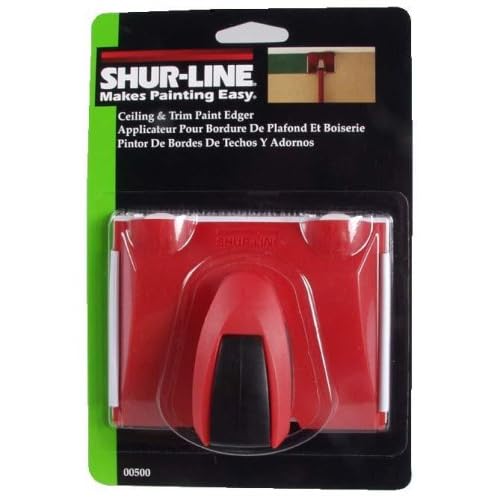 Costs around $4 at your Home Depot! I wouldn't suggest attaching it to a pole when you're doing up near the ceiling since you kind of lose control over it that way, get on a ladder instead

Oh, just had to add this. Are you using the correct roller for your walls? There are different rollers for different wall types (textured, smooth, stucco, etc) - maybe getting a special roller will help you from having to do multiple coats too
C

I think there is a huge difference between painting/decorating a house to your likes and remodeling. I've done both. To answer your question:

*when the amount of money you are spending is more than you'll be able to afford
*when a little project becomes a HUGE project (the Domino effect and all too common in home remodeling)
*if you don't plan on spending at least 5 years or more in your house.

There was another post like this under the Home and Decorating title (or something like that), that I wrote a boatload regarding the hell of remodeling. Quite a few were discussing how bad it can be and when you should NOT do it. If you do a search, it should come up.

BTW, I love painting, lol. Instant gratification and it is the EASIEST of all things to do when it comes to changeing the look of your home.
You must log in or register to reply here.
Share:
Reddit Pinterest Tumblr WhatsApp Email Link
Register on TPF! This sidebar then disappears and there are less ads!
Sign Up
Top Bottom