Since this forum is about Plastic Surgery in Asia and there are already some threads asking about, for example, DIA Chaeyeon's rhinoplasty, I thought I'd be a good idea to just open a whole new thread dedicated to Asian (we'll probably be talking about Koreans mostly, though haha) Celebs and their alleged surgeries.

Personally, I find this topic to be soooo interesting (and inspiring

), but when I tried talking to fellow K-Pop fans about it, well, you can guess how that played out:
'Oppa just gained weight, he didn't have plastic surgery!'
They thought I was bashing their idols, although ps is something positive to me.
Seriously though, gaining weight doesn't mean you suddenly grow a higher nose bridge...

So, first is one of my personal faves who got a pretty obvious rhinoplasty: 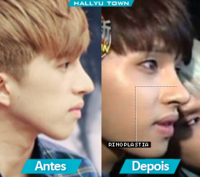 VIXX' Ken (yes, the nose is his trade mark lol)
Now that I look at it, his jaw is also suspicious... Gotta investigate more.