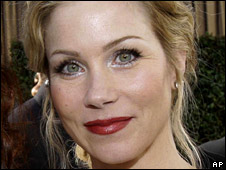 Applegate revealed she was angry when hearing she was ill

US actress Christina Applegate has had both of her breasts removed after being diagnosed with breast cancer.
The star told US breakfast show Good Morning America, she was "100% clear and clean" following the procedure.
"It did not spread. They got everything out, so I'm definitely not going to die from breast cancer," she added.
Applegate, best known as Kelly Bundy in US sitcom Married With Children, opted to have surgery after testing positive for the BRCA1 breast cancer gene.
'Shaking'
Applegate was diagnosed with cancer in one breast last month after a doctor-ordered MRI scan.
The star - whose mother, Nancy Priddy, is also a breast cancer survivor - admitted she had been having mammograms since the age of 30.
Applegate, now 36, revealed she was "so mad" when she received the diagnosis.
"I was just shaking and then also immediately, I had to go into 'take-care-of-business' mode.
"After looking at all the treatment plans that were possibilities for me, the only one that seemed the most logical and the one that was going to work for me was to have a bilateral mastectomy," Applegate said.
She had the surgery three weeks ago, she told reporter Robin Roberts, and will have reconstructive surgery over the coming months.
"I'm going to have the best boobs in the nursing home," she joked. "I'm going to be the envy of all the ladies around the bridge table."
Applegate is scheduled to appear on a one-hour TV special, called Stand Up to Cancer, to be aired on ABC, CBS and NBC on 5 September to raise funds for cancer research.

I'm so proud of her, I feel the same way about Kylie, both strong women and I'm so pleased that they're both so open about everything!!

Good for her! Speedy recovery...

Wow, that is so amazing, she is so strong for being able to make that decision so quickly. It's got to be one of the hardest things to do, to have your breasts removed... I hope she does end up with fantastic new ones! You go girl!

leothelnss said:
Wow, that is so amazing, she is so strong for being able to make that decision so quickly. It's got to be one of the hardest things to do, to have your breasts removed... I hope she does end up with fantastic new ones! You go girl!
Click to expand...

I'm glad she will be ok. That was very brave of her.

good for her, but i also read that she purposely opted to forgo chemo/radiation until after she has a baby so shes *trying* to have one with her current bf asap. seemed odd especially since her previous bf just recently oded. i just hope she makes the right choices and everything works out for her

wow! that was indeed brave
K

My prayers are with her to move forward with great strength and to help others along the way!

She's such an amazing and strong woman!

Wow, so sad to be so young and have to go through all of that. I wish her the best.

good for her, i would have done the same. hope she has a quick recovery!

Seems like many women are going the double route . . . what a decision.
But she seems excited about new boobs!
good healing vibes to her ~~~~~

My thoughts are with her! I just wish her the best!!!
You must log in or register to reply here.
Share:
Reddit Pinterest Tumblr WhatsApp Email Link
Register on TPF! This sidebar then disappears and there are less ads!
Sign Up
Top Bottom