Anthropologie/UPS rant relating to a new dress that was purchased

I hope this is the right place to post this.

I recently placed a phone order for this dress with Anthropologie by Anna Sui: 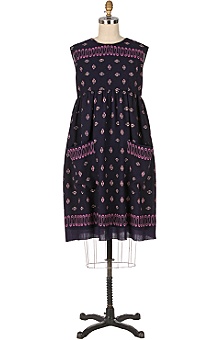 I first saw the dress in an Anthro catalog late August and fell in love, but not necessarily the price tag ($398). It finally went on sale on the website for $299, but having worked at Anthro in the past, I know that sometimes, the store sale price is better. So, I called and located one dress left in my size on Nov. 22nd at the Seattle store. It was marked down to $199 plus and extra 40&#37; off - so, my total came out to be something like $125 plus change. I was SUPER excited at the deal!

I also thought that since my birthday was coming up, and I was going to have a little party on Dec. 2nd, I could totally order the dress and receive it by then. Boy, how wrong I was...

Turns out, the major winter storm that was being talked about in the news lately hit around that time, so the package was still in Washington state as of Nov. 29th. The day of the party, I had to run out and get a new dress since I don't have anything casual and fun for cold weather (mostly black and work dresses). It didn't bother me that much because inclement weather happens.

I tracked it again on Monday, and it was supposed to be delivered last night. The UPS came around 7pm last night and the dress was not there! I called UPS and they told me that the only thing on the label for the package was that it was being delivered to Arlington, VA 22204 (where I live) - no name or specific address!!!

I can't believe that they would have even accepted a packaged labeled that way. I gave them the information and decided to give Anthro a call.

I spoke with the manager there, and she was apologetic and assured me that her shipping manager was really thorough and she doubted that there was missing information. She offered to discount the dress even further to compensate for the fact that two and a half weeks later, I still haven't received the dress.

So, I am crossing my fingers that I FINALLY get it tonight.

Thanks for letting me rant!

I'm keeping my fingers crossed for you - that would be so frustrating!
•••

How annoying!!! I hope it gets there tonight for you! Its really cute.
•••

Ugh, I hate slow shipping! It's a gorgeous dress and you are getting it at a fabulous price, I hope it arrives soon!
•••