Playboy Covergirl Anna Faris Was 'Self-Conscious About Her Body'

Anna Faris plays a Playboy bunny in the upcoming film The House Bunny and posed (clothed) for the September cover of Playboy magazine  but she says she wasn't always so eager to show off her physique.

In high school, "I felt unattractive, short and self-conscious about my body, and I would purposely emphasize that by doing odd things," Faris, 31, tells Playboy. "I wore glasses, braces, odd hairdos and dumpy clothes. I was clumsy and awkward. When I was a freshman I wore a Christmas tree skirt as a cape. I couldn't get any dates until senior year."

That's not really a problem anymore for Faris, who was divorced from her husband, Ben Indra, in February. Neither are raunchy comedy roles  which even her parents are used to now.

"When I went with my parents and brother to see Scary Movie at a Seattle strip mall the opening weekend, I was like, 'Mom, theres going to be a couple of points when Im going to need you to go to the bathroom or get me popcorn. Just obey me,'" she says. "Now Ive totally broken them in." 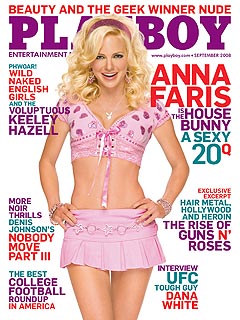 I think she is absolutely hilarious.


I loved her in the Scary Movies and she was great as an obnoxious, demanding pop star in Just Friends.

Here are some pictures of her movies:

Here are my favorite pictures of her from magazines:

Love her!! With every movie, I grow to love her more! I can't wait to go see The House Bunny!

i love her, she's hilarious. Anyone know what her natural haircolor is? Is she Brunette? Her first movies usually had her w/ darker hair, but now I always see her Blonde.

She is sooo cute and sooo funny!!! I love that her comic side is just so natural! She is great in House Bunny- I saw it yesterday. And she has a smokin' body!!!

i love her!! she is so cute! i remember in high school when the scary movies were really big my friend told me i reminded them of her...it made me so happy! lol i think she definitely is cuter blonde than brunette.

i've been a fan ever since i saw her on entourage.
L

Don't reallycare for her. I always find it weird when average looking celebs cast themselves as models or this case playmates. imo, when i see the trailers I think "someone thought she looks like a pb?" Then I found out she come up with the idea and she produced it anf thought oh.
You must log in or register to reply here.
Share:
Reddit Pinterest Tumblr WhatsApp Email Link
Register on TPF! This sidebar then disappears and there are less ads!
Sign Up
Top Bottom