Amazing pictures Of The Newborn Elephant Saved From Its Own Mother 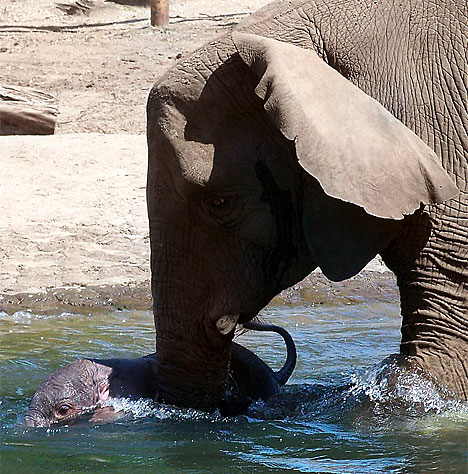 Horror: Onlookers watch as she shoves her son in the water 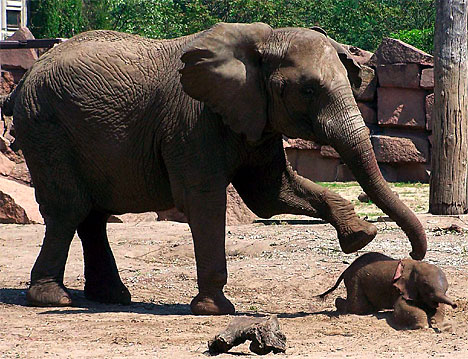 Killer intinct: She raises her huge foot and appears to stamp on the baby 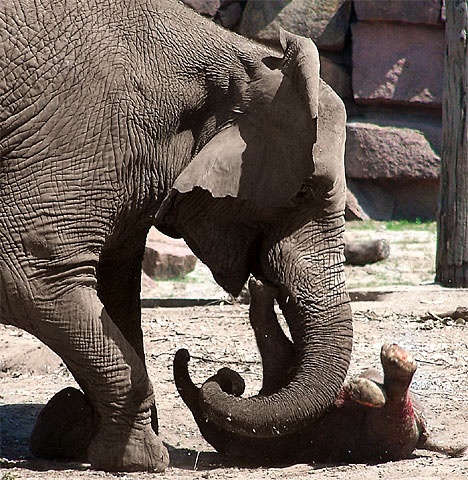 Jumbo attack: Pori rolls her 250lb baby with her trunk 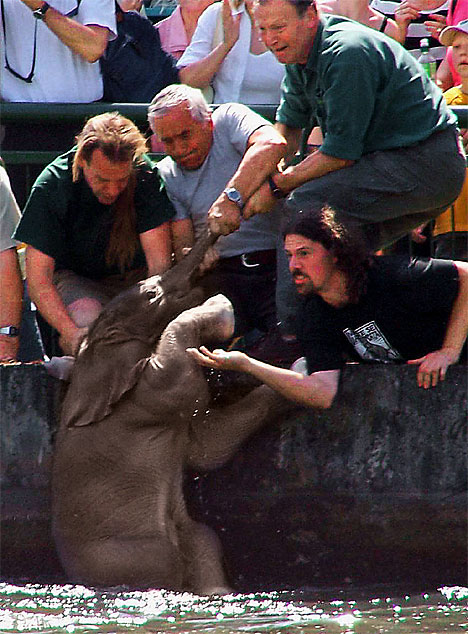 Mammoth ordeal: Onlookers save the elephant by pulling him out of harm's way by the trunk

The African elephant is a highly sociable animal, whose strict matriarchal hierarchy puts the care and protection of its young at top priority.


But as these amazing pictures show, sometimes even in this most maternal of species, things can go terribly wrong. Those who watched the drama insist it was a brutal attack by a mother on her newborn infant. Yet it is not clear whether this was the truth.


These pictures illustrate what happened at the Friedrichsfelde Animal Park in Berlin last weekend. Visitors were horrified as a newborn baby elephant was seemingly saved from certain death by keepers, after his stressed-out mother appeared to crush and then drown him.


Staff at the park were caught off-guard by the speed with which the African elephant Pori, 26, gave birth to her 250lb baby - and then, in the moments afterwards, seemed intent on killing him.
Pori - who crushed her first baby to death at the park in 2005 in a tragic accident - seemed to stomp on her newborn calf.
We cannot know what the elephant was thinking, but with the previous fatality in mind, staff at the animal park were concerned she was trying to kill him.
It certainly looked that way to the hundreds of onlookers, many of them children, who burst into tears as baby Dumbo was tossed like a helpless ragdoll.
Then, suddenly, Pori began rolling him through the sand of her enclosure, using all three tons of her weight to move him like he was a beach ball.
Many people at the park screamed as keepers flocked to the enclosure to try to halt the attack. They hurled apples at the animal, tried to tempt her with carrots and cabbages. But she seemed intent on killing her baby


And because there were other elephants in the enclosure, some of them highly aggressive bulls -including the father, Tembo - who were themselves worked up by what was going on, they dared not intervene.
All watched helplessly as Pori rolled her son into the water of the enclosure, which had been designed to resemble a watering hole on the African veldt.
"It was terrible," said Andre Dominkius, who, with his wife Baerbel, witnessed the incident.
"The poor baby was making these squealing noises and had blood pouring out of a wound on one of his eyes.
"When she rolled him in the water, his own instincts must have kicked in, because he stuck his trunk above the surface as a snorkel to try to breathe."
But, thankfully, there was a happy ending to this sickening drama. Keepers eventually managed to lure Pori away with a selection of bread and apples.
That was the cue for staff and bystanders to pull the shocked baby out of the water by his trunk.
He was prescribed a tranquilliser and, after being given a clean bill of health, was reunited with his mother on Monday night - although a guard was posted in the elephant house to make sure that her demons didn't return.
Heather Sohl, a mammals expert at the WWF, said: "There is some evidence of this happening after elephants are relocated, and it has been known for male elephants to kill a calf."

She said it was possible the highly artificial environment of the zoo, with no opportunity for Pori to take her place in the elephant matriarchal hierarchy, meant her normal maternal instincts went astray. Whatever motivated this attack, Pori has calmed down now, and mother and baby are doing well.

I think its safe to say that this elephant should never give birth again! Its amazing she didn't kill the poor baby and the staff were able to rescue it in time!

Child abuse of a different breed....

That is so scary!!! I can't believe they gave her back to her mom! The poor bebeh! I love elephants, she must have been highly stressed about something.

My Goodness !! They're pulling the elephant by his trunk. What a frightening start to his little life.

I hope Mother and baby are doing much better.

aaaah, why are the pulling the baby elephant by the trunk??? Jump you a$$ into the water and hoist him up, come on!??@?#$

She was probably very stressed. Seems kind of odd for a mother and newborn to be out on display like that. At the zoo here they seclude the mom and newborns so they can have some alone time and have some peace and privacy. Poor little baby. I hope his mom accepts him now and he will be safe from her.

Holy cow! If this happened at our zoo I highly doubt we would put him back with the mother. And don't worry about the trunk - there are some 100,000 muscles in it and it is incredibly strong even at that young age. If they went in the water, the mother would have charged and killed them too - they are very fast even in water. She does not sound like a fit mom to me. Not all animals are, thats just the way it is, like humans. And yes, males of alot of species (including elephants) have been known to kill babies but for the purpose of forcing the mother to breed with them. Nature can be brutal. It isn't a Disney movie out there.

Danica said:
That is so scary!!! I can't believe they gave her back to her mom! The poor bebeh! I love elephants, she must have been highly stressed about something.
Click to expand...


^ I totally agree! I don't think they should've given that poor little one back to Mom either! I hope Baby is doing okay and is safe now (and Mom has calmed down)!
D

I wonder if she was trying to 'spare' her baby from a (miserable?) life in captivity? I'm very nervous about him being back in with her. Hope he's safe, poor darling.

dallas said:
I wonder if she was trying to 'spare' her baby from a (miserable?) life in captivity?.
Click to expand...

this is the kind of anthropomorphizing that hinders what keepers like myself are trying to accomplish with caring for wild exotic animals in captivity. please only make these statements when you know for a fact that the animals are in "miserable" conditions. no one loves these animals more than the people who care for them 24 - 7.

you know what miserable is? African elephant mothers, aunts and babies being culled in the wild because there is not enough room for them to co-exist with people.
H

bagnshoofetish said:
It isn't a Disney movie out there.
Click to expand...

No kidding. That is just sooooo scary. I am sure everyone watching felt helpless.

HubbaWubba said:
No kidding. That is just sooooo scary. I am sure everyone watching felt helpless.
Click to expand...

I would have been horrified! I would have done the exact same thing the keepers did - grab any appendage I could while at the same time trying not to get me or my colleagues killed in the process.
H

wow. this is such a first for me. I hope she doesn't try and make a second attempt at killing the baby again!
You must log in or register to reply here.
Share:
Reddit Pinterest Tumblr WhatsApp Email Link
Register on TPF! This sidebar then disappears and there are less ads!
Sign Up
Top Bottom