Wow, it's gorgeous! I had no idea at all that Chanel had outlets! I have a lot to learn!!

oh my, i love this bag, so prettyyyyyy!!! congrats!
L

This is a gorgeous find, you sure was in the right place at the right time,enjoy and congrads.

I was in Woodbury this afternoon. Just felt like driving up there on this rainny day for some peaceful time by myself.

The Woodebury Chanel outlet as the lady who bought the ivory bag had mentioned, they usually have very few handbag displayed. Most likely some clothes and jewelry and few shoes only.

, the mini orange bag is still there and it is very cute but the price was $1,425. I got the classic 2.55 one shown in the one of the pictures for $1,495. Have already the 2.55 caviar with silver closure in black but couldn't resist another one.
Had the SA to ship it to my address for tax saving and will upload some pics once I get it.

FYI, there are still some evening bags left, some heavy bulky caviar bags (not classic, just fashion handbags) cost around $3,000 but look more for day trip or traveling bags. And some lambskin short strap handbags in white and red around $2,600

Think the best deal for me was the classic flap. The color is very unique, classy and the leather is stronger than lamb skin plus interior is soft lamskin with cute mini pockets for phones and compacts

Anyone who plans to go to the store, please hurry as the classic flap I got, there are only three left in the store and the SA said this shipment was for this Spring and Summer. Which means, they won't get any until after Summer!

Thank you so much for update! I'm still thinking... Probably I should try to resist! Congrats on a great find!

NYCavalier said:
I wont drag it out because I'm just to excited I snagged this for such a great price!!!!! 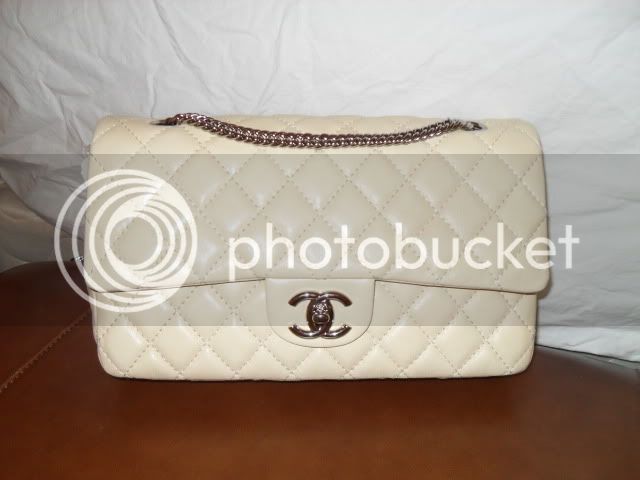 I am so jealous of your find

... gorgeous gorgeous flap at an amazing price! You are a lucky girl ... congrats and enjoy!

^^ Great find. I am planning a trip to NY soon. Can't wait 'till i go to the Chanel outlet store

Congrats to the ladies to got something nice at the outlet!

Congrats! What a beautiful bag and such a great find. If I was there, I prob would of bought all those mini's =)..
L

This is too great.

Beautiful! The white lambskin looks incredible.
Wish we had outlets like that here in Europe...

Hi. Just want to ask - was the SA you spoke to that said the place would no longer carry RTW the manager?

I find this very surprising and sad because the outlet has carried RTWs for as long as I can remember and now and then, there would be people (me?) going there to mop up their RTWs... In fact, when I was there last year just after Christmas, I was told by the manager that the RTWs went very quickly during the black friday sale.


shanafy said:
They also had the large Accordian totes
Retail 3495 - They had red and beige marked to 2650.
Pretty Nice deal.
They Also had a small accordian flap which was 1895 in black.
They also had stuff from the drill collection.
The drill tote black was 2795 marked 1675
They had a drill flap I didnt check price.
They also had beige dayglo orig. 3490 marked 2600
They also had a 2 red wocs both were overpriced I thought so I dont remember but over $1500.00

Trying to think of what else...
They had the white modern chain bags which were additonal 40% off of outlet price.
The medium size one with flap was 1495 less 40% off.

I was also shown a navy small flap silver hw - not displayed in the backroom. It was 1495 and burgundy interior.

I was told
by the SA who I've purchased stuff from in the past That they will no longer carry ready to wear and will be getting bags in from now on.
Click to expand...

OP, Congrats on a great find. I feel like such a dope..I'm 50 minutes away and have neverbeen!!!