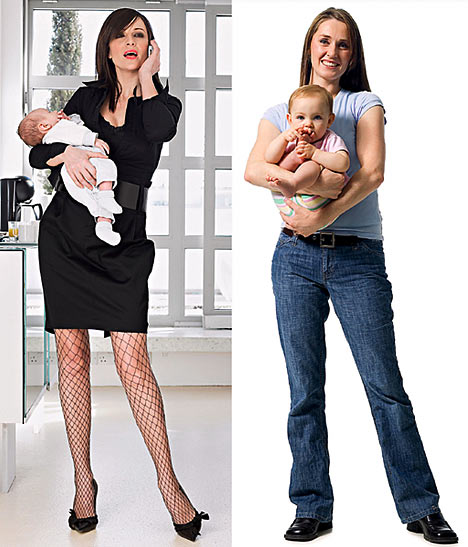 Battle lines are being drawn between mums who hothouse children - and the Beta mums who don't.

A new Mummy War has broken out over the "best" way to bring up children - and it's causing a deep and rancorous gulf between two tribes of women who regard each other with disdain and dislike.
But this time the battle for school gate superiority has less to do with whether or not women work full-time or stay at home, and everything to do with time management versus tree climbing.
Step forward the Alpha and Beta mothers.
The Alpha mother has reigned supreme for more than a decade.

Held up as an aspirational role model for the rest of us, she never has a hair out of place and can be spotted tapping urgently into her Blackberry on the school run.

This sort of woman treats parenthood as a project to be managed down to the last second.
Fiercely organised, she's likely to be highpowered and well-educated. Aren't you feeling inferior already?
But there's more to an Alpha mum than that.
She treats her home life as an extension of her corporate one: family time is merely another slot in the bulging diary.
Her children are seamlessly ferried between extra curricular activities with little to no time to spare for relaxation or, God forbid, just thinking.
Doing nothing is not an option for these youngsters.
For too long this pernicious style of over-parenting has been held up as a barometer of maternal success.
But now, at last, there is a Beta backlash from the millions of mothers who cannot and will not see their children turned into little automatons with no aim in life but to strive relentlessly for as many accolades and achievements as possible.
The battle has burst into life in the U.S. with the publication of a series of books aimed at persuading mothers that less is more when it comes to organising your family's lives.
Even a TV presenter - classic Alpha mum material, surely - has written a parenting guide called Good Enough Mother: The Perfectly Imperfect Book Of Parenting.

The author, CBS newsreader Rene Syler, insists: "Our children are people, not projects. Motherhood is not a contest."
Well, as a proud Beta mum, you can be sure I'll be answering the call to arms in this battle for the hearts and minds of the next generation.
Though I hate the term Beta, with its inference of second-class parenting skills, I'm happy to adopt it if it means I'm not the other sort.
Because it's long been clear to me that so-called Alpha parenting is not only ridiculous, it's damaging to the children it purports to nurture.
So what does being a Beta mother mean? Well, if Alpha woman is in a power suit and stilettos striding along to her toddler's Mandarin class, Beta mum is in sensible flats and jeans with children who speak, well, the same language as their friends. And that's just fine by me.
While an Alpha mother schemes to become a school governor, the Beta mum can never quite remember the date of the school fair.
Now there is good news for our style of parenting.
New studies are backing us up, proving that when children enjoy childhood, it is good for their development.

Here's the science: more relaxed mothers mean happier children.
"Alpha mums are so determined to make a project out of everything, they are not considering or loving the child, who becomes an object of status or self-glorification for the mother," says Brenda Shoshanna, an author of books on family stress.

Ah yes, the child as a pride-inducing social accessory.
A kind of toddling Tamagotchi to be taken out every so often, tampered with and packed off somewhere else.
We've all heard these women boasting about their babies' achievements.
Whenever I meet a professional working mother who begins our chat with "Michael's speaking some Spanish, he's only 18 months", I want to scream 'So what!' quickly followed by 'The poor thing".
Down the years, I've worked as a pre- school assistant, clown and drama teacher, and I have yet to meet the child who, when asked what makes them happy, says: "Being busy all the time with a variety of learning experiences."
Years ago, I worked on a summer camp for the daughters of extremely rich New Yorkers.
The mothers would totter up to the cabin in kitten heels, peck the girls on the cheek and drive away for three weeks, feeling good that their offspring were learning new skills.

At night, half the ten-year-olds cried themselves to sleep. Katie, an angry girl who bossed everyone around, said through her sobs: "We want to be with our parents. But they send us away. Don't they love us?"
Alpha mothers put greater emphasis on a child's perceived success, while Beta mums value their child's happiness.
For Alpha parents, staying ahead of the pack educationally is an obsession - and one I believe is truly hateful because of the pressure it puts young children under. It's also likely to be counterproductive.
In psychologist Oliver James' book Affluenza, about the modern "disease" of longing to be rich, he finds a higher incidence rate of neurotic illness among girls from wealthier families.
Since their earliest years, they have been taught that approval comes with good grades. Success is striven for with such vigour that it leads the girls to self-harm, drugs and anorexia.

The responsibility for a great deal of this behaviour lies with misguided Alpha parents who link affection and pride to test results.
A child from such a family will feel that getting a B-grade means they are less loved, and can in turn lead to a spiral of unhappiness and anxiety.
So should a child's formative years be seen as an opportunity to compete, cram and get ahead or are they a joyous time of experimentation and chaotic liberty?

One of the clearest ways to spot an Alpha or a Beta mum is to ask them about the highly emotive subject of reading age.
With literacy levels dependant on your school catchment area, it's no wonder parents are frantic to get children off to a good start.
But guess what, children do not need to read at four.
Great if your child is the one in 10,000 who has the IQ of Einstein and naturally reads early.
Otherwise there are many other things that are more important for a three or four-year-old to learn - such as creativity and lifelong skills such as problem-solving and perseverance.

My eldest daughter, Alexandra, will be seven this year.
As we live in France, despite having started Maternelle ( kindergarten) at four, she is only now making her first sing-song efforts to read.
In France, as in Germany (and many other European countries), the nursery years are seen as a time to introduce toddlers to a rich learning environment. The social aspects of good behaviour, politeness and, most of all, playing group games are rightly concentrated upon. Reading comes much later.

As a Beta mother, I am not immune to anxieties and hopes about my girls' education. But my concern is that they find it a thrilling, inspiring experience.
I certainly don't worry about their future career prospects. Their childhood is too precious.
All mothers - but especially Alphas - need to think carefully about what our main duty is as parents, both to our offspring and to society as a whole.
Should we be fostering future generations of imaginative, giving, contented adults, or training our children to be grade-obsessed, moneymaking machines?
When my girls come home from school, they want to play with dollies together or hide and seek with their father and me. So that's what we do.
Our home is full of books, which Alex picks up of her own choice, from time to time.
This is the philosophy which allows your child to find their way in life, not to be forced into interests and disciplines they may come to loathe.
"There's an illusion that you can control who your child will become if you do all the right things," says clinical psychologist Daphne de Marneffe.
"But parenting is about discovering who your child is and fostering growth and development as an individual."
Basically, a more laissez-faire attitude should not hinder a child's ability to learn.

You can tell if a toddler's mother is a Beta by looking around the home.
Our house is an assault course of building blocks (on the living room floor), tubs of paint (the dining table), with pipe cleaners and beads in Holly and Alex's bedroom (last night's attempt at making stick people).
What you won't find are toys that are supposed to teach. Again Beta parenting has always been the power of instinct over intellect.
Experts have borne out our suspicion of gadgets and gizmos. Research reveals that building blocks and Play-Doh are far better for learning than high-tech educational toys and videos, simply because they are more interactive.
Betas know that traditional toys (as opposed to shiny, expensive ones - or even tutors) mean real family interaction.

"Making" and "doing" is what children enjoy best. And they want to do it with Mummy. It can be dull threading beads for your daughter's bracelet.
But this is what real family life is about: interplay, interaction and love.
It's hard to see where any of these elements come into the lives of the children with the most excessively Alpha parents.
An Alpha mother is likely to view such messy, sticky playthings as a waste of time - unless there is a nanny doing it with the children, I suppose.
So yes, it's about time an anti-Alpha movement emerged - I'm just surprised it didn't happen earlier.
Give yourself a cheer if you've ever forgotten it's half-term and raced to an empty school. Or if your child speaks only one language at the age of five.
We must not be frightened out of good, honest parenting by the need to keep up some absurd appearance.
Pity the Alpha mums, because there's a serious question these women need to ask themselves.
Are those extra hours at work really essential to pay for the preprep school fees, tutors or all those extra curricular classes?
Is it really necessary to spend time meticulously planning the family's diary a month in advance so not a moment is wasted?
Shouldn't the Alpha mums admit that the life they have constructed is not for the children's sake at all. Isn't it all really done because they actually rather dislike spending time with their family?