Al Jarreau, a versatile vocalist who sold millions of records and won a string of Grammys for his work in pop and R&B as well as his first love, jazz, died on Sunday in Los Angeles. He was 76.

His death was announced by his manager, Joe Gordon, who said that Mr. Jarreau had been hospitalized for exhaustion two weeks ago. On the advice of his doctors, he had canceled his tour dates and retired from touring.

Mr. Jarreau did not begin a full-time musical career until he was nearly 30, but within a few years he had begun attracting notice for a vocal style that was both instantly appealing and highly unusual. Critics were particularly taken by his improvisational dexterity, in particular his virtuosic ability to produce an array of vocalizations ranging from delicious nonsense to clicks and growls to quasi-instrumental sounds.

Although he made his initial mark in the jazz world, Mr. Jarreau’s style, and his audience, crossed stylistic barriers. His music incorporated elements of pop, soul, gospel, Latin and other genres. It was a mark of his eclecticism that he won six Grammys across three different categories: jazz, pop and R&B. He was also among the performers on a Grammy-winning children’s album, “In Harmony: A Sesame Street Record.” 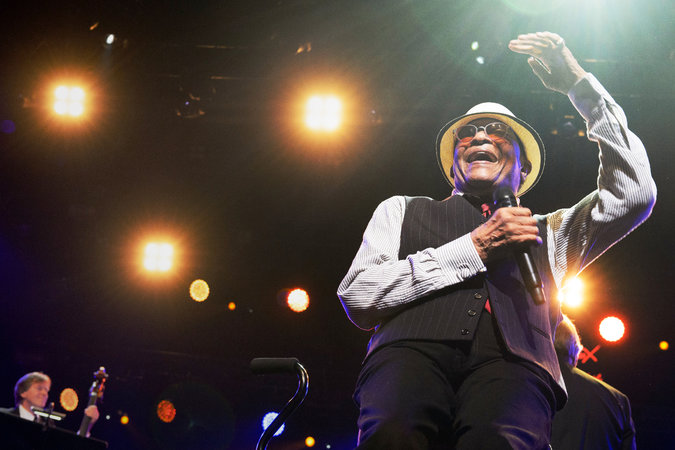 Mr. Jarreau performing last year at the 50th Montreux Jazz Festival in Switzerland.CreditAnthony Anex/European Pressphoto Agency
Reviewing a concert by Mr. Jarreau at the Savoy in New York in 1981, Stephen Holden of The New York Times encapsulated what many saw as both the pros and the cons of Mr. Jarreau’s singular style:

“Al Jarreau may be the most technically gifted singer working in jazz-fusion today,” Mr. Holden wrote. Of the evening’s performance, however, he continued: “Mr. Jarreau’s concert lacked the emotional range of great jazz. He is such a prodigious talent that the absence of even the slightest blues inflections kept his music from cutting deeply.”

But critics’ reservations never deterred Mr. Jarreau, who prided himself, as he told The Los Angeles Times in 1986, on his “jazz attitude,” which he defined as “the idea of being open to each and every moment as a chance to create something different.”

“I try to be receptive,” he added, “and to be listening, and to not be afraid to try something new.”

Alwin Lopez Jarreau was born in Milwaukee on March 12, 1940, into a musical family. His father, a minister, was a fine singer; his mother played the piano in church. Young Al began singing at 4, harmonizing with his siblings. As a youth he sang in church, as well as with street-corner harmony groups and local jazz bands.

Mr. Jarreau earned a bachelor’s degree in psychology from Ripon College in Wisconsin in 1962, and a master’s in vocational rehabilitation from the University of Iowa in 1964. Afterward he moved to San Francisco, where he worked as a rehabilitation counselor for people with disabilities.

But Mr. Jarreau found he could not resist the pull of jazz and before long was singing in local nightclubs. By the late ’60s, he had quit his day job and embarked on a nightclub career, first on the West Coast and eventually in New York.

He reached a national audience with the album “We Got By,” released by Warner Bros. in 1975 to critical praise and commercial success.

Though advertised as his debut, it was actually his second album. A decade earlier, Mr. Jarreau had quietly recorded an album, later released on the Bainbridge label under the title “1965.” Though Mr. Jarreau took legal action, without success, to block its belated release in 1982, it is esteemed by jazz connoisseurs today.

Appearances on “Saturday Night Live” and other television shows raised his profile, as did extensive touring. In 1981 he had his biggest hit with the song “We’re in This Love Together,” which reached No. 15 on the Billboard pop singles chart.

His other Grammys came in 1979 for the album “All Fly Home” (in the jazz category), and in 1993 for the album “Heaven and Earth” (in R&B). A seventh Grammy came in 1981 for “In Harmony: A Sesame Street Record,” a compilation children’s album that featured a range of artists.

Among Mr. Jarreau’s best-known recordings was the theme song for the long-running television series “Moonlighting,” for which he wrote the lyrics to Lee Holdridge’s music. He appeared on Broadway as a replacement in the role of the Teen Angel in the 1994 revival of “Grease.”

Mr. Jarreau’s first marriage, to Phyllis Hall, ended in divorce. He is survived by his wife, the former Susan Player; a son, Ryan; two brothers, Marshall and Appie; and a sister, Rose Marie Freeman.

Mr. Jarreau canceled a number of concert dates in 2010 after experiencing heart and breathing problems during a European tour. He was hospitalized for 11 days but resumed his touring schedule after his release, and had continued to perform until recently.

Shortly after his 2010 hospitalization, he said in an interview that his health problems had not been as serious as reports suggested, but joked that he appreciated the attention they received in the media because it proved that he was a celebrity. “I figured,” he said, “‘Yeah, maybe I have arrived.’”

In love with my life ❤️

Saw him in concert with George Benson many years ago. One of the best life performances ever. RIP[emoji120][emoji22]
Reactions: Deco
B

We're in this world together....we got a love that will last forever....

Great artist are going and leaving us with mediocre talent.
Reactions: Irishgal, mrs moulds and Deco

I loved his voice, so smooth. Gone too soon.
Reactions: Luvbolide and mrs moulds

You will be missed RIP

Moonlighting brings back so many wonderful memories, I thank you for that.
Reactions: mrs moulds and boxermom
You must log in or register to reply here.
Share:
Reddit Pinterest Tumblr WhatsApp Email Link
Register on TPF! This sidebar then disappears and there are less ads!
Sign Up
Top Bottom