A reveal one in a half years in the making!!!

Ok so I joined TPF back in December of 2012, I found out I was going to be able to go to Paris and wanted to get my first chanel. I joined here and began my research. I found out about a certain WOC and scoured every boutique and dept store in Paris but did not leave empty handed, I ended up with a gorgeous coated pearly tweed WOC in white which I Love!!

Anyhow I vowed someday that I would get on board with the next one that came out. However chanel decided season after season to only release these woc's in textiles other than leather.... Until one day I heard finally they were going to have this particular WOC in this very special combination.... I jumped for joy when I got on multiple lists awaiting the day this would finally be released!!!! Who's here to join me in a reveal?

I'm sure many of you already know what this is.... 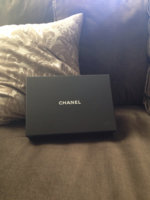 I waited many months to see it in person and I must say when I opened the box I have not stopped smiling since!!! 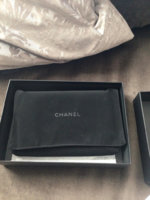 Open open can't wait! So happy for you?


Sent from my iPhone using PurseForum 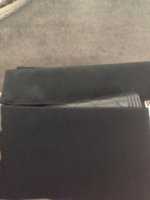 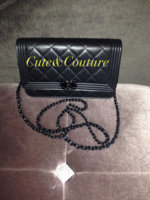 It's kinda hard to photograph the depth of this gorgeous boy WOC.... Like another tpf'er I keep referring to him as Batman.... This caped crusader stole my heart immediately!! Don't tell the Hubs ok?!? Lol 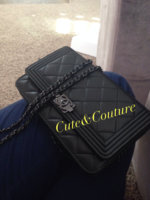 I think this photo is most accurate. It's a metallic black calf but it's not super metallicy. It's almost like a satin finish is how I would best describe it. It looks pretty durable. The chain w the black or ruthenium nior as one SA pointed out to me... Is oh so sexy to me!! Absolute love at first sight!!!

We r twins!!! Isn't it so cool with the black hw too?!?! Congrats cuteandcouture! 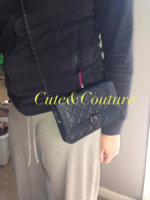 Congrats on this beautiful boy woc!!

I love love love this WOC! Congratulations and enjoy!
L