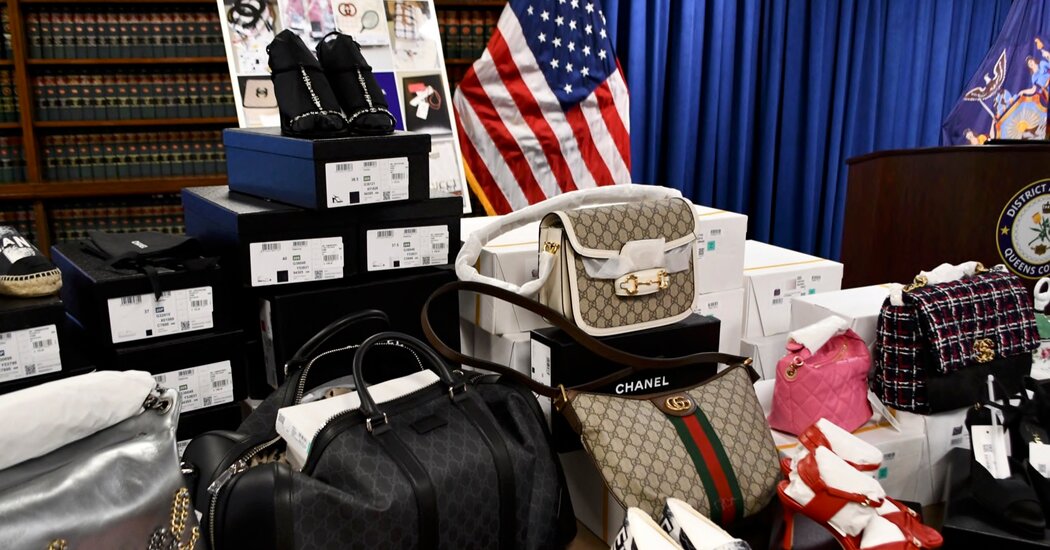 ‘Goodfellas,’ the Sequel? 4 Arrested in $6 Million Heist at J.F.K. Airport

The men used fake paperwork to steal more than 4,000 Prada, Gucci and Chanel items from a cargo area at the airport, prosecutors say.

The man walked into an office at Kennedy International Airport with paperwork that showed the flight information and serial numbers he needed to pick up an expensive shipment. Everything appeared to be in order, and he drove off with a truckload of Prada.

But the bags, clothing and jewelry never made it to their destination. Instead, they were taken to a defunct beauty shop in Queens, prosecutors said.

On Wednesday, the man, David Lacarriere, and two others appeared in court to face charges in a 22-count indictment in one of the largest heists in the history of J.F.K. airport. Prosecutors said they stole $6 million worth of luxury goods in two thefts — the second more brazen than the first — that had echoes of the famous Lufthansa robbery in 1978 that played a starring role in the film “Goodfellas.”

It turned out the men had used fake paperwork to cart off more than 4,000 real pieces of luxury merchandise, prosecutors said. They were caught in June when the police raided the Candi World Beauty Bar, the closed salon where the stolen merchandise was stashed, and interrupted a sale, prosecutors said.

“After months of free spending and probably thinking that they had gotten away with these audacious heists,” said Melinda Katz, the Queens County district attorney, “all six defendants have been indicted.”

Prosecutors said they stole $804,000 worth of Prada merchandise in January, and then in May, they hauled off $5.3 million in other high-end accessories, from Gucci sneakers and socks to Chanel espadrilles, necklaces and handbags.

“He didn’t know this was coming,” Mr. Koslow said. “We intend to fight this.”

Lawyers for the other men charged in the scheme could not be reached.

Prosecutors gave few details about how the men came together to pull off the alleged thefts, but Mr. Lacarriere and another defendant, Gary McArthur, 43, had both previously worked as truck drivers at J.F.K. Davon Davis, the other man who appeared in court on Wednesday, had worked at Delta Airlines.

All three men pleaded not guilty in State Supreme Court in Queens on Wednesday. They face a slew of charges including grand larceny, conspiracy, possession of stolen property and possession of a forged instrument.

In 2016, Mr. Lacarriere pleaded guilty to conspiring to steal about$700,000 worth of Chanel and Hermes clothing, jewelry and bags, among other items, from Newark Liberty International Airport.

That case was strikingly similar to the most recent scheme: The authorities said Mr. Lacarriere and another man used a forged document to enter a cargo area at the airport in New Jersey and drive a truckload of merchandise to a facility near Kennedy Airport.

When the owners of the Chanel and Hermes goods came to pick them up, the airport realized they were missing and tracked the truck through a GPS device.

Mr. Lacarriere spent about a year in New Jersey State Prison before his release in January 2018, according to state records.

About two years later, he and Mr. McArthur showed up at the business office of an airport cargo warehouse, officials said. Before arriving, Mr. Lacarriere had falsified an airport document listing specific package information and serial numbers, which prosecutors described as a sophisticated and complicated forgery.

The men, enlisting the help of two others, then used a separate tractor-trailer to load four large pallets of Prada merchandise onto their truck, officials said. Less than four months later, the men returned for the higher stakes version of their theft, presenting another set of forged paperwork.

After both trips to Kennedy International, prosecutors said the men later abandoned the trucks on roads, drenched them in bleach and took the merchandise to Candi World.

When the police raided the salon in June, officers discovered hundreds of stacked boxes filled with merchandise, still neatly wrapped in the manufacturers’ packaging and bags.

During the raid, the police interrupted a sale to Alan Vu, 51, prosecutors said. Mr. Vu was arrested in New Jersey on charges of criminal possession of stolen property and conspiracy, and is awaiting transfer to New York. His lawyer could not be reached for comment.

Matthew Wilson, chief of the Port Authority Criminal Investigations Bureau, called the case “an anomaly” on Friday, saying the defendants had been elaborate in their planning and the investigation had taken time as a result.

Ms. Katz said J.F.K. has added new protocols for cargo pickups, including additional identification requirements and photographing of truck drivers. She said the situation underscores the need to continue closely monitoring security at one of the world’s busiest airports.

“My theory is if you can get things out of the airport, you can also get things in,” Ms. Katz said. “So this is part of an ongoing security check to make sure our air travel is safe and that people are confident.”
Reactions: cczh and alyssamay_xx

I love hearing these stories when the crooks and scammers get caught!

Thank you for posting.

Don't understand their logic, such a big effort to steal bags and clothing? too hard to turn them into cash and take lots of storage room, and pick up in airport? wouldn't they think they would leave surveillance evidence? guess they were desperate to make money? ha. it's like ask to be arrested.
You must log in or register to reply here.
Share:
Reddit Pinterest Tumblr WhatsApp Email Link
Register on TPF! This sidebar then disappears and there are less ads!
Sign Up
Top Bottom