Without those glass slippers, Cinderella would still be sweeping the fireplace, and Prince Charming would be in the middle of a nasty divorce from one of her step-sisters. Deprived of her bejeweled pumps, Dorothy would be stranded in Oz. And the old lady who lived in her shoe? Well, she probably would have been better off investing in real estate than in a broken-down old boot.

The female shoe has always been an object of fascination, endowed with mythical power. And, as women from former Philippine First Lady Imelda Marcos (who possessed 1,200 pairs of shoes) to Sex and the City's Carrie Bradshaw (who one episode realized she'd spent $40,000 on footwear, yet couldn't afford an apartment) have shown, some women are willing to spend fortunes to be properly shod.

American women spent nearly $17 billion on fashion footwear between October 2004 and October 2005, according to The NPD Group, a retail and consumer information company based in Port Washington, N.Y. If that sounds like a lot, it should--it's a nearly 10% increase over 2003 spending.

"Shoes make women feel so beautiful that they're willing to pay anything," says Jessie Randall, the Brooklyn, N.Y.-based designer and founder of Loeffler Randall, a shoe and handbag line she founded with her husband. "You can't put a price on something that makes you feel that special."

Market analysts are keenly aware of the trend toward extravagant shoe-spending. "Footwear has become a fanatical purchase for even those women who never had a footwear fetish before," says Marshal Cohen, chief analyst at The NPD Group. "Apparel is no longer the highest priority in women's wardrobes: handbags and footwear have become the signature items used to project personal taste, wealth and style."

Cohen estimates that shoes costing $1,000 and up account for less than 1% of total women's fashion footwear sales (fashion footwear is defined as anything other than athletic), but he acknowledges a growing group of women willing to pay more for their shoes now than they ever have been before. "It changed as early as a year-and-a-half ago but picked up steam in the past six months. Women consider footwear their signature item now."

Besides theoretically helping to lure a royal mate, there are real benefits to investing in an expensive shoe. For the most part, if a shoe costs a lot, it's made of better materials and will last longer. In some cases, however, they are not sturdier--simply rarer.

"When we're talking about shoes at $14,000, it's the materials," says Michael Fink, senior fashion director at Saks Fifth Avenue (nyse: SFA - news - people ) in New York City. "Leather and the pattern and type of wood they're using, the jewels, are the beads hand done, how rare are the feathers--because a lot of shoes with feathers are using feathers that can't be gathered anymore, from the archives of the couture feather houses. "Roger Vivier shoes have a specific curved heel, and the way it is attached to the footbed is very mechanical and difficult, so you're paying for engineering, too," Fink says.

Randall has seen firsthand how using the priciest materials can drive up the cost of a shoe. "Most beautifully made shoes are from Italy. The master craftspeople are there, and Italian leather is the best leather in the world."

So what did? Not surprisingly, there are a lot of exotic leathers--alligator, snake and ostrich, to name a few. The more leather, the higher the price, so there were a lot of boots, too, including the pair of $14,000 Manolo Blahnik alligator boots that topped our list. And from Manolo to Gucci to Ferragamo, the list is a roster of designer names that command premiums.

Fink sees two kinds of real-life buyers. "We see a fashion customer who's in the know, wants a limited-edition shoe, and money is no object to her. She is, hopefully, appreciating the beauty of what she's buying and treating it as an art object." Fink hypothesizes that many shoes purchased at stratospheric prices are bought by collectors. The shoes go directly into a display case and never see a foot. "But for another kind of woman, paying $1,000 for a pair of shoes makes sense if she's paying $7,000 or $8,000 for a Chanel suit," he continues. "In that case, she wants shoes that match in look and quality, and the shoes don't bring up the total expense of the outfit by that much."
I know this is long , but its interesting
••• 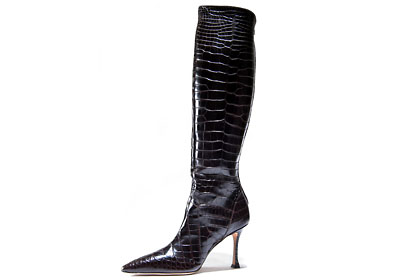 Famous for excruciatingly high heels and similarly painful price points, Manolo Blahnik nevertheless inspires cult-like dedication among his customers. He even does bridal shoes, though we don't recommend the alligator boots for anything matrimonial--unless it's a bachelorette party. The $14,000 pair is available at Manolo Blahnik's West 54th Street boutique in New York.
•••

lol never send a business magazine to do a fashion magazine's job.
•••

Omg!! Reminds me of the way-too-expensive diamond bra by Victoria's Secret!
•••
S

those 20k embroidered boots were Roger Vivier, by the way. i just remembered.
•••

That episode where Carrie realizes that she's spent 40K was on tv today. I'd never seen the series and never knew what the hype was all about but that episode was fun.

Btw, what do those 20K Vivier boots look like? Diamond crusted heel?
•••

meme said:
That episode where Carrie realizes that she's spent 40K was on tv today. I'd never seen the series and never knew what the hype was all about but that episode was fun.


i think they're just chock full of hand-sewn embroidery
•••
S

14k?! You'd best be able to buy a car to transport yourself so those shoes never touch the ground.
•••

Well, I guess they succeeded in PR cause we're all talking about it.
•••

I don't know about you all but it is very cold and snow is on the ground. For $14,000, these shoes better come equip with wiper blades, heater, great traction, and a defroster in case my car doesn't start tomorrow.
•••

baglady said:
I don't know about you all but it is very cold and snow is on the ground. For $14,000, these shoes better come equip with wiper blades, heater, great traction, and a defroster in case my car doesn't start tomorrow.
Click to expand...


Too funny! Yeah, I agree, they better be super special, or just short of being a car.
•••

they're really kind of ugly.
silk with embroidery.
•••

manolo's heels are so wimpy... i'm sorry, but a 2.5" stiletto is NOT what i'd consider excruciatingly high... and that's about all i've ever seen manolo doing...

manolo's heels are so wimpy... i'm sorry, but a 2.5" stiletto is NOT what i'd consider excruciatingly high... and that's about all i've ever seen manolo doing...

...azzedine alaia can teach him a thing or two...
Click to expand...